Exchanging places is a scheme run by The Cycle Task Force of the Met. A fantastic scheme that gets cyclists into HGV’s and shows them the blind spots! It’s a real eye opener, I was shocked when I first when in and I throughly recommend everyone to do it when they get the opportunity.

Some very wise words where said in the video and I don’t think they where highlighted enough.

Whilst it’s not strictly true that eye contact makes you safe, I always think it’s a good idea to do. A. your body movement to look behind should be eye catching to the driver. B. If you can see the driver then you know you are not in his blind spot!

As the driver went on, he mentioned on approach to the lights as well. This is important, when filtering you need to be careful and doing so when there is no escape route or time for you to get in front then it can be a recipe for disaster. Remember that getting to the front should not be your goal when approaching red lights, keeping safe and visible to other road users should be. And that means not filtering up the side of HGV’s

The more room a lorry has left you, the more likely it is going to turn left. The more tempting it looks, the more dangerous it is.

A fantastic comment that could easily be missed. Reading the road is a very valuable tool, and seeing that space on the side of a vehicle of such a size being so big should be a big indicator that it is going to attempt to turn at the junction. Remember we must engage our brains whilst cycling and try to read every situation as we approach it. If the possibilities of a vehicle turning left are high, then stay back, stay safe!

As the pair summarise, it’s team work that we need. Both parties need to be a bit clearer with what they are doing and don’t be so brash to pass each other when approaching a junction. 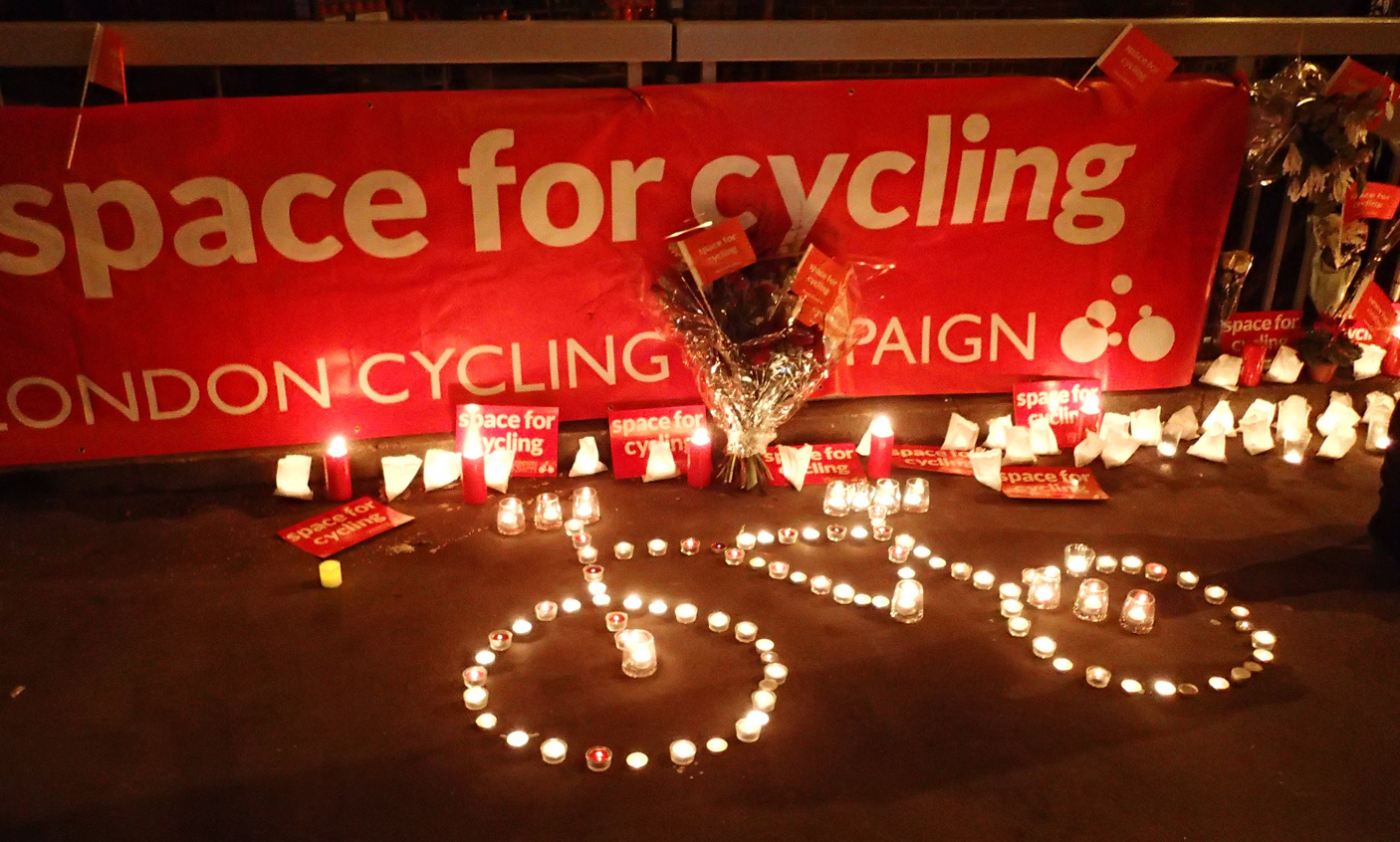 I was watching BBC News yesterday morning, and Boris Johnson was on speaking about the 5 cycling deaths we have had on London’s roads in only 9 days!

He pulled out his standard statistic which goes something like this

Year on year cycle deaths are down. Cycling numbers are also up, which means it is better.

These people are dying and nothing is being done!

Our streets are built on 1960’s philosophy of car is king, everyone uses them to get everywhere.

That isn’t the case, our roads need to be re-designed to suit the needs of everyone that travels on them. To keep everyone safe and to allow all road users to get to their destination without fearing their life when they get to a certain junction.

I was at the vigil the other day for Venera Minakhmetova. The LCC where going to attempt to have 2 minutes silence for those that had recently died. Unfortunately the motorists we where preventing from continuing their journeys didn’t appreciate it and leant on their horns, this ruined the silence. Of course, these motorists only days before probably took 2 minutes out of their day to remember our fallen war heroes. But as soon as they get behind the wheel, seem to become different people and forget about others.

Boris needs to up his game, things have got to change, yes it will cost money, yes it will change how some people use our roads but we need to build a sustainable city for everyone to use what ever mode of transport they use. Other cities around the world are host to many cyclists and easily get through the year with zero cycling fatalities, why can’t London be the same? 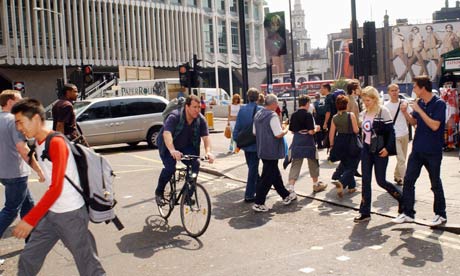 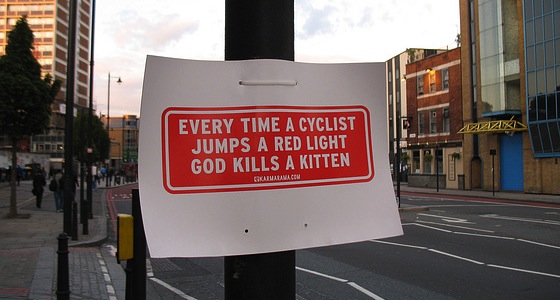 I uploaded a video a few weeks ago of a large cement mixer not driving perfectly on the road. Minor stuff including encroaching into an ASL and overtaking and pulling in just before some stopped cars.

Like I said, nothing major, but I uploaded it and forwarded it onto the Police so they could get in contact with the company and sort out this behaviour before someone gets hurt. I was going to forward it onto the company as well but didn’t get around to it.

Before I could contact the company I got a message from a subscriber on youtube, I’ll call him Mark, Mark had been in contact with the company and got an interesting reply.

I appreciate your concern but unfortunately I don’t think it was as dangerous as you’re making out. I would appreciate if “gaz545” could get in the bike lane rather than cycling on the line!

The reply came from someone who I shall name Paul, Mark replied to Paul and quickly set him straight on a few things, including positioning and the legal side of the ASL.
I also contacted Paul and wrote the following

Your comment to Mark, ‘I would appreciate if “gaz545” could get in the bike lane rather than cycling on the line!’.
Quite obviously you are not aware on how bicycle lanes function or the requirements of cyclists to use them. There is in fact no legal requirement for cyclists to use any cycle lane that is provided for them and we are often advised not to cycle in them because they are poorly designed, not wide enough and are often filled with glass and other sharp objects such as stones.
Whilst you would appreciate that I should stay in the bike lane, i believe it is fair for me to expect Rapid Ready Mix vehicles to drive safely around vulnerable users and in general on the road.
Your driver clearly broke the law when he crossed the first solid white line at the traffic lights, that is known as red light jumping, something which people often complain cyclists of doing but your driver is no better.
By also stopping in the advanced stop zone ( the big blue area with the bicycle logo in it) he put me and several other cyclists in his blind spot, whilst I can see that your vehicles are kitted out with all the required mirrors, that does not mean that your drivers uses them or that they are aware of any vulnerable road users to their left. I’m sure you can appreciate that not every cyclists is sensible and sometimes they put them selves in unnecessary positions which leave them in a position of danger.
His second action of cutting in front of me wasn’t as bad as i was first expecting but the principle of the manoeuvre is still dangerous. Overtaking cyclists, pull in front of them and then stop, very dangerous is it not? How would you feel if a driver on the motorway pulled in front of you and started braking? Would you think it was dangerous?
At first i thought he would be coming all the way across and this is where the issue is, not all cyclists would read this situation or simply wouldn’t care and would continue on their way up the left hand side whilst your lorry is turning in, this can often lead to cyclists being squashed under large vehicles and is a killer on London’s streets.
I would expect more from a professional driver, he got no further than if he waited safely behind in each case.

Neither my self or Mark got any more responses from Paul. Not what I was expecting but a later found out that the Police had sent the company a letter about the driving and giving them some advise about what they should be doing.
I guess that Paul heard about this in the office and decided that he was better off not replying to those who have the law behind them.