Bike Biz alerted us to the fact that Addison Lee drivers have received a letter from the Chairman of the company, telling them to start using London bus lanes as of today. 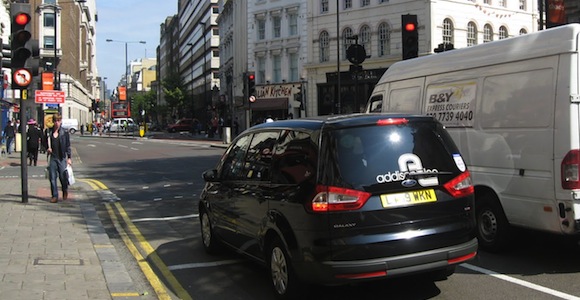 Our legal advice is that bus lane regulations are currently being misinterpreted to exclude [private hire vehicles] from bus lanes. Such misinterpretation is unlawful.

What defines who is and who isn’t allowed in a London bus lane, is the Traffic Management Order for the bus lane. I’ve looked at several of these across several boroughs and they all have similar wording (obviously built from the same template). They state something along the lines of

In this Order- …. “bus”, “local bus”, “pedal cycle”, “taxi”, “traffic lane”, “contra-flow” and “with-flow
lane” have the meanings given in the Traffic Signs Regulations and General
Directions 2002

Looking at the TSRGD Regulation 23, we can not determine what the definition of a taxi is. Is a minicab / private hire vehicle a taxi?

Only licensed taxis (black cabs) can pick up passengers on the street. Any minicab driver who picks up customers without a booking is acting illegally. This includes minicabs lined up outside pubs and clubs.

Taxis (black cabs) have a light on the front displaying the word ‘TAXI’.

Only taxis (black cabs) may be hailed by customers and picked up off the street. Minicabs cannot accept fares that have not been booked in advance

So TFL make it clear that there is a difference between a taxi and a private hire vehicle.

No such advertisement shall include—

So Private Hire Vehicles are NOT allowed to be advertised as a taxi or as taxis.

So are Addison Lee a Private Hire Vehicles Operator?

When you become a driver with Addison Lee, you join London’s largest private hire operator

Please can I have all information relating to Private Hire
Vehicle access to Bus Lanes.

TfL does not currently permit private hire vehicles into bus lanes on the
Transport for London Road Network (TLRN). Therefore, no information is
held.

TFL released a statement yesterday that said the following

Private hire vehicle drivers could be liable to personal criminal prosecution if they break traffic regulations, including by driving in bus lanes.

At last, TFL will be receiving praise from cyclists all across London. Addison Lee drivers are known to be some of the worst in London.

2 thoughts on “Addison Lee Vehicles Can Not Use Bus Lanes”