I’m sure many of you have already seen the website ride-smart.org (which has now been pulled, it can be seen here). It’s meant to be a cycling campaign that raises awareness of dangerous cycling and how it can get you into trouble. But instead it calls people ‘Stupid Twats’ and makes up fictional limericks to try to make people see the dangers of certain actions. 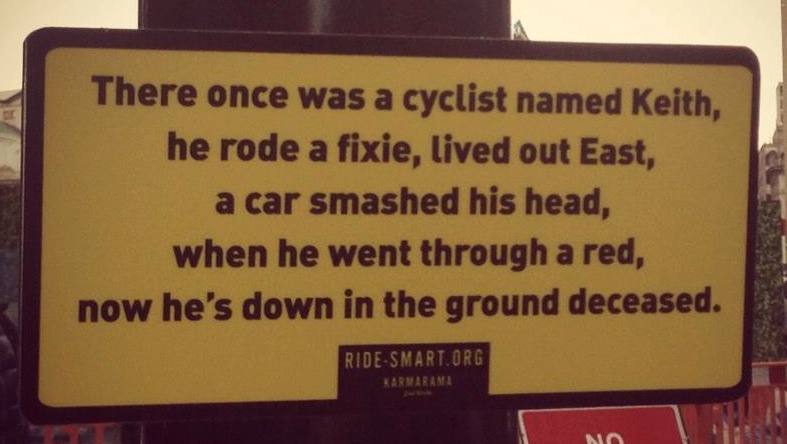 As I’m writing this, my twitter feed is going off the hook and I’ve just been informed that they have published an apology, which reads as below.

Karmarama, the company behind it, certainly made a few mistakes along the way. One which I can relate to is their use of other people’s videos without permission or credit to those who filmed and uploaded them. This of course has led to several of the video owners lodging copyright complaints with youtube. Youtube have a policy of 3 strikes and your out, if they don’t remove the videos in time then the youtube account will be closed down.

Karmarama has tried to suggest that they gave credit to the owners of the footage by this statement on their website.

All videos were taken by lovely riders who give a shit. Unfortunately we never saved their usernames and couldn’t track them back. Sorry lads, keep on uploading these to the net. Together we’ll make a difference.

It was right at the bottom of the website and almost impossible to read.

Karmarama has since taken down the videos but the original playlist “What a stupid TWAT” is still available for viewing.

Compare this to Silly Cyclists, a video series I do which highlights the mistakes that many road users with cameras record and send to me. My approach is not to victim blame or to call people “stupid twats”. Instead I use the clips to help show others how to deal with situations they may find themselves in. An approach which takes a potential negative and turns it into a positive to those who are watching.

I’ve received much praise from many people for the series, many people saying they have learnt a lot from it and now feel safer about cycling on the roads. Even motorists have said they now give cyclists more room as they now understand some of the issues we face.

It’s essentially a similar campaign to what Karmarama has done but the approach is completely different.

2 thoughts on “How not to campaign for safer cycling”