I’m sure many of my subscribers recall this incident and are wondering what was happening with it. Several weeks ago I was in court as a witness for it. The driver was found guilty of Careless Driving, 3 points on his license, £200 fine, £140 court costs and £15 victim surcharge.

This incident has been much more than just that result, I’ve known what has been happening behind the scenes for quite some time.

Those who use RoadSafe London will know that there was a change in how things were handled late last year, a change that many of us appreciated! This was the first incident to be dealt with under the change, and potentially the turning point. When I originally reported this incident I was left with no feedback and when I chased about it I still had no feedback. After contacting an officer who I knew had previously worked with roadsafe the report was chased up and I was put in touch with PC Walters.

From there I gave a statement and provided footage. This was different to before, others and I had previously been to RoadSafe HQ to meet with the staff and talk about the system but this was a different approach.

The company failed to respond to any form of contact and that isn’t just from my self but from many of the people who viewed the video. They were inundated with e-mails and didn’t know how to respond. This goes to show that a company vehicle with contact information on it is a massive advertising board, if you drive in a manner which people deem to be dangerous then the company will be contacted. I did not put details about how to contact the company or ask people to contact the company in my video description, people did it on their own accord.

PC Walters visited the company to get details on who was driving at the time. The company had been making improvements to its fleet, including improved driver training and putting “Look out for cyclists” stickers on the dashboard of their vehicles. VOSA visited the company and checked on everything, I don’t know anything apart from that and I believe that happened after the improved driver training and stickers.

Despite the clear video footage of what happened, the defendant originally pleaded not guilty to careless driving. It went in front of a magistrate and the defendant and witnesses were questioned. The defendant said that he was distracted by a van that sped past him and took the same turning as him, he had to slow down and sound his horn as a warning. The horn is on the same stalk as the indicator and he was unable to indicate earlier. The defendant said that he thought the cyclist was taking the same turning as he was. He mentioned his professional driving experience of over 20 years and training he was undertaking to drive bigger vehicles.

As I left the court room, the driver said “Watch yourself out there” to me and his brother gave me a sinister look. Probably not the best thing to do when a waiting room is filled with several police officers.

This can be a confusing road layout for someone who has not ridden it and is one that has been raised on several occasions as a danger spot to TFL, I raised in back in 2010 when I spoke to the manager of CS7 and CS3. 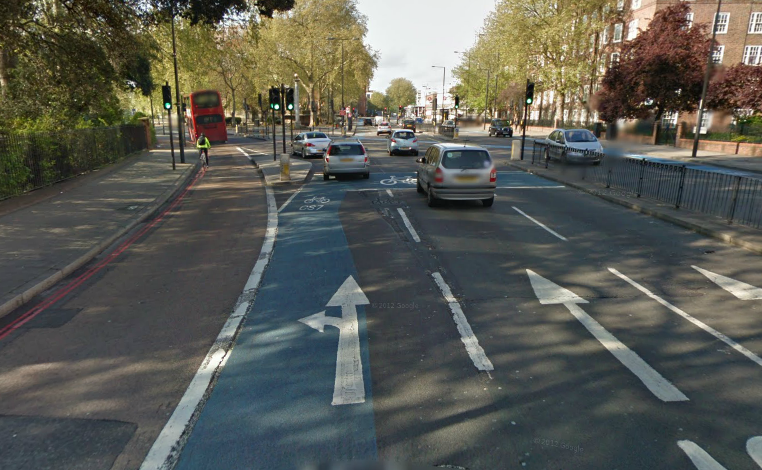 And there is the problem. A cyclist wishing to continue straight ahead must merge into the same lane as traffic that is wishing to turn left. A strong position is required in the lane and taking it as early as possible is the best approach. However with motorists zooming past and cutting in front of you, this is daunting for many cyclists and ultimately motorists feel as though they can push past when really they shouldn’t.

The work that was undertaken by the Police was fantastic and something I had not seen or heard of before with a non-collision cycling incident caught on camera. The punishment I believe was fair given previous punishments we have seen with video footage but perhaps there is still an underlying exceptional hardship taken on drivers. I’m sure many will say that they believe that the driver should have lost his license.

The work that the company did to improve their drivers was something I was not expecting and I think they deserve credit for that!